Poutine is unleashed at Phog!

Yes.  A new menu exists at Phog.
Frank has been thinking about it for a while, and he has a heap of cheese-curdy, gravy goodness in store.
The first night of release, Tuesday, February 16th, there was a veritable carnival of calories.

Frank was on fire, delivering the currently large menu of poutine combinations.

The Classic Poutine and the Phonions (onion rings covered in gravy and cheese curds) were quite popular, with at least one of the Phonions orders going out with BACON!

The poutine named after the CBC, (maybe as a tribute to having the Searchlight contest last year) which stands for “corned beef and coleslaw”, smelled better than anything ever has in this building!

The Cheeseburger poutine was love on a plate. It was ordered several times on the opening night. 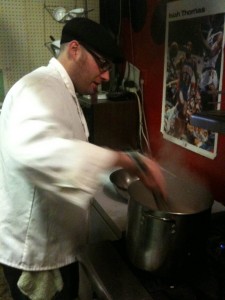 Come on down to Phog Lounge between 5pm and 10pm, Tuesday through Saturday, and make Frank hustle in that kitchen!!
Here’s a look at the current poutine menu:
The Classic
– cheese curds and gravy – $5.50 plus tax

Add a veggie topping to any poutine for $1.50
Add meat topping $2

4 Responses to Poutine is unleashed at Phog!